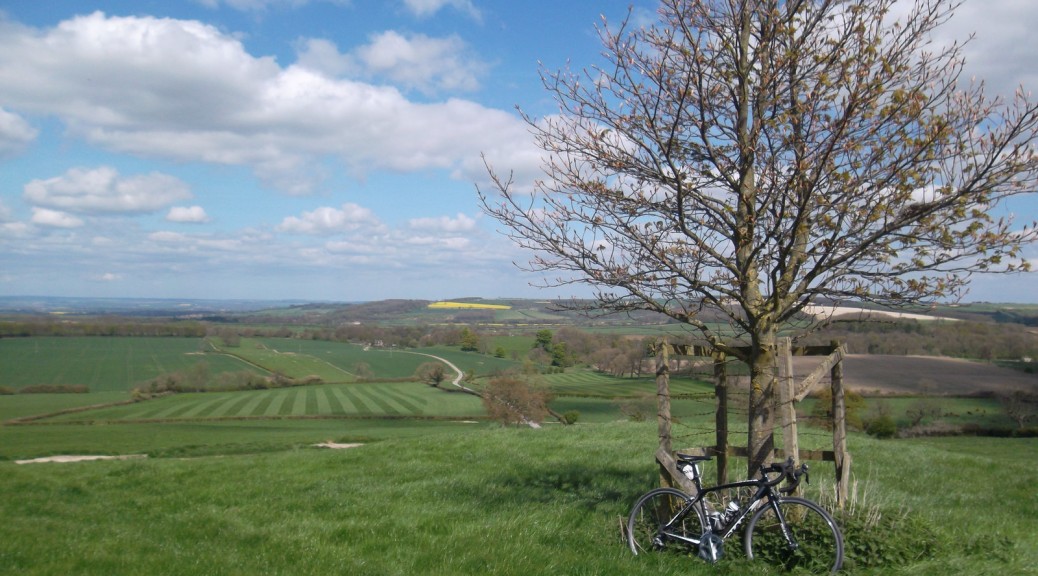 This wonderful 50-mile loop takes in elements of two Big Skies Bike Rides, but is different enough from both to be worth our consideration here. Heading out east from Pocklington you’re not on the B1246 long before taking the left turn at Kilnwick Percy. There follows six miles of glorious Yorkshire Wolds countryside through Millington Dale shared with the Way of the Roses and Yorkshire Wolds Cycle Route up to the outskirts Huggate, before carrying on with the coast to coast route through Tibthorpe – described by Dixie Wills in the Guardian as his favourite road on the Way of the Roses – and as far as Kilburn (National Cycle Network Route 164).

Here I take a left turn and a mercifully short few hundred metres of the A614 towards Driffield, but quickly turn left again and head north towards Garton on the Wolds. This generally quiet road (marred only by the presence of a scrap metal merchants to your right – try not to look) leads all the way to Garton and then, just as briefly, another main road – the A166. So a left turn here and a speed limit of 30mph through the village is followed by a careful right turn on to the B1252 – Garton Hill and the shallow ascent on to Sledmere. 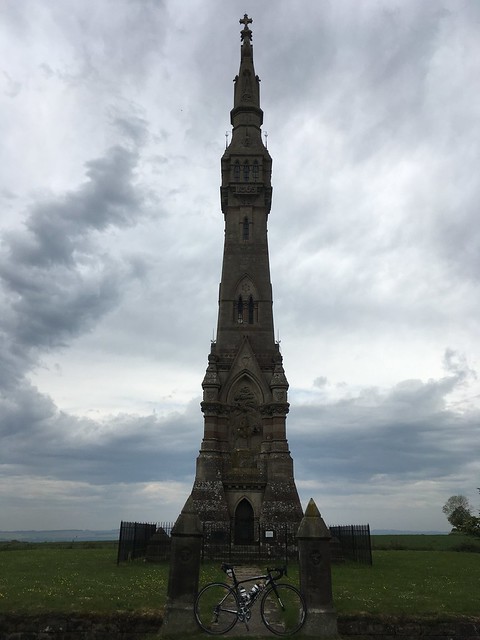 In Sledmere if you fancy stop there is the popular Coach House Cafe in the grounds of Sledmere House or the well-regarded Triton Inn. [NB at the time of writing the pub is closed because of Covid-19 and the Coach House Cafe and toilets are undergoing refurbishment. Two small shops on the Sledmere estate are still serving hot and cold takeout drinks and some food. There are portable toilets.] In any case the turn off for this route is sign-posted ‘The Luttons, Weaverthorpe’ – opposite the pub – and is a mainly downhill breeze to a left turn at the crossroads where a lumpy road leads to a left turn at the T junction. Through West Lutton and then don’t miss the right turn on the bend sign-posted ‘High Mowthorpe’ and ‘Settrington’.

You’re now on a section of the Pock Pedal sportive and a gradual uphill road before the fall away in to Settrington affords very satisfying views in either direction. Do take particular care on this twisting and sometimes gravelly descent, especially in poor weather conditions. At the T junction on the outskirts of Settrington turn left and continue to bear left (signposted Grimston).

At the next T junction with the B1248 you have a choice, perhaps depending on the time of year and your feelings about bulls (stay with me). On the day I last rode this route I turned left towards North Grimston, popped over the little bridge with its 25mph sign, and at the junction on the right hand bend took the only unsigned road (you can just make out a brick utilities building and cottages further along the road). This road takes you up to Grimston Brow (Luddith Road) – and is easily missed. (If you get to the Middleton Arms you’ve gone too far.) 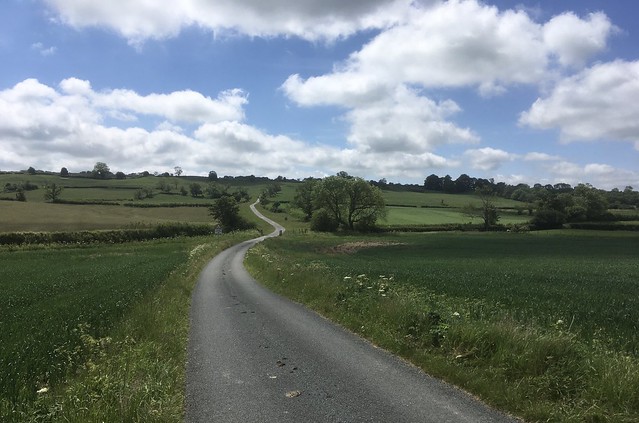 Now, to get the top of this deceptively testing little climb you will pass over two cattle grids. There is a warning that cattle may be in the – only partially fenced – fields. So bear that in mind, eh? With a few miles in the legs this is a surprisingly stiff little climb made easier since being resurfaced quite recently. Just watch out for cow pats. And the bull. 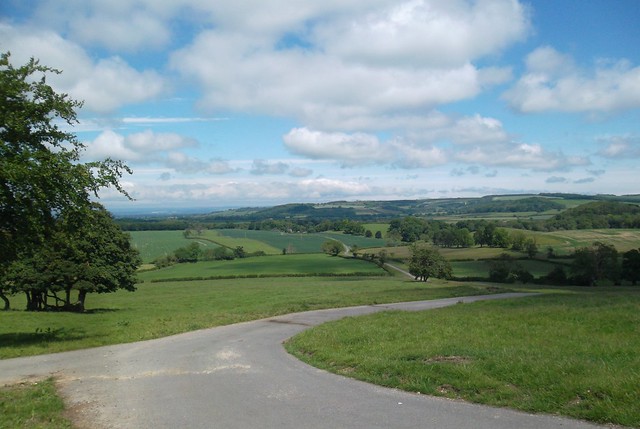 Anyway, once beyond that last cattle grid the road is much improved having also been resurfaced in the past few years. Follow it round to the T junction and turn right – and bear right at the fork – along the rewarding descent towards Birdsall.

(The alternative to the Grimston Brow climb is to turn right at that first junction at the B1248 as though heading towards Malton, and soon after left to Birdsall.) 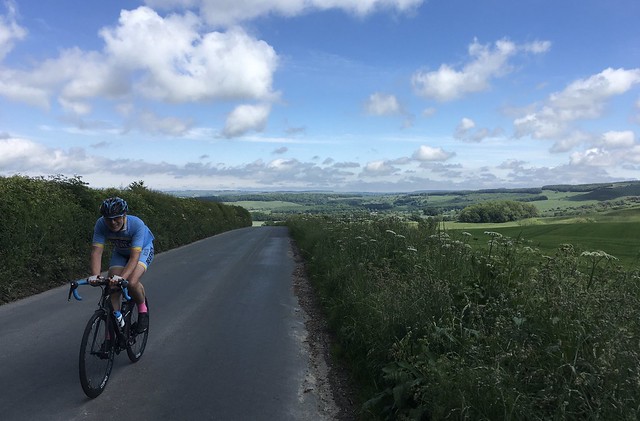 Whenever I pass through Birdsall I seem to slow considerably perhaps unconsciously reserving my energy for the climb that is to follow. Birdsall Brow is one of those hills that defeats me before I’ve even got going. It has featured on the Heart of the Wolds sportive and the longest of the Big G Cyclosportive rides, always preceding, as with our ride described here, the glorious descent in to Thixendale along the Water Dale road. The Village Hall and former Youth Hostel in Thixendale serves refreshments on Sundays in normal times. 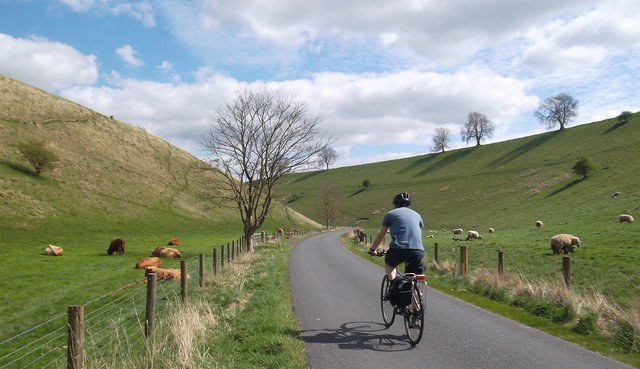 Water Dale descent in to Thixendale

Climb out of Thixendale along what has come to be known as the ‘Fuller Road’; as you leave the village turn right (follow the brown tourist sign) and stay on this road until you reach Roman Road where you should take a left turn south towards the A166 crossing at Garrowby Hill and the highest point of the Yorkshire Wolds.

I strongly recommend crossing over on to the cycle path which is followed to a right turn at the side road in the direction of Givendale. At the end of the road you will have turned on to is a T junction. This Yorkshire Wolds Cycle Route signs point to the left, but a right turn takes you south on to Givendale Hill for payback and big ring fun after all the climbing done as you follow the signs back to Pocklington to complete this rewarding 50-mile Yorkshire Wolds loop – one of my favourites – at a canter.

View this anti-clockwise loop from Pocklington in Garmin Connect

Some of this route forms part of the ‘Thixendale from Malton or Newton on Derwent Big Skies Bike Ride, which until the Stamford Bridge loop was easily the toughest of the series. However, it seems that the people behind these short day rides no longer promote them on their official web site. I wonder if this is in part due to safety concerns on Grimston Brow, which they suggested should be ridden downhill. I don’t know, but it is worth pointing out that the route is a little bit out of the way. I sent riders up this hill in an event I organised a few years ago. Some of them gleefully reported that they had sent the biggest rider on his own first so that he could flap his arms up and down to wave away the cattle. You have been warned!

TEST: ‘Sledmere and Thixendale from Pocklington’ as a Strava segment: