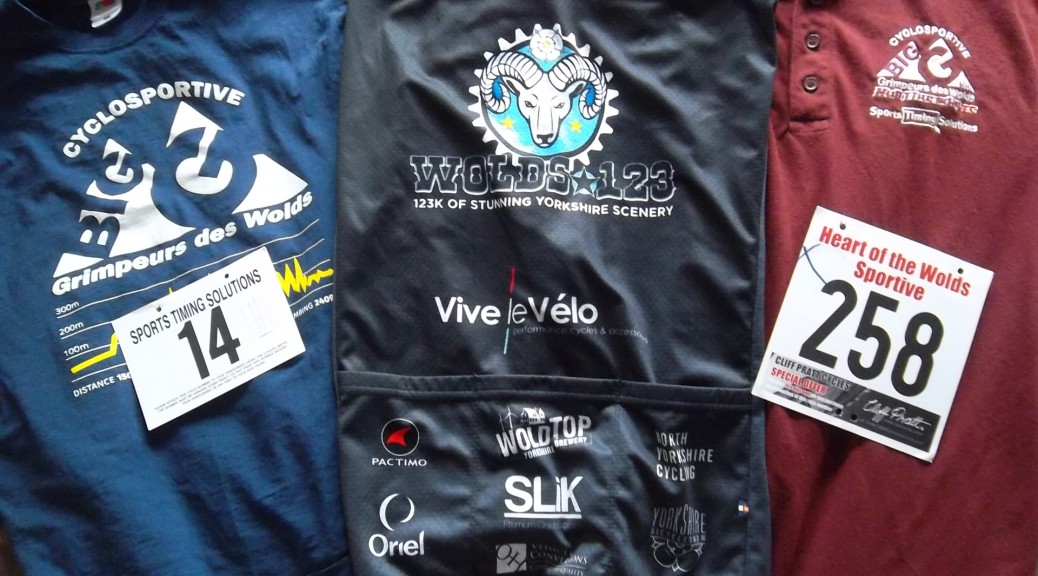 *** Most of the events below have been cancelled for obvious reasons, but, as at the end of June 2020 the later ones may still take place ***

For the three years between 2014 and 2016, with a minimal budget, I organised a series of Challenge Rides that were basically club Standard Rides open to non-members. Despite wanting to share my enthusiasm for cycling in the Yorkshire Wolds it was obvious that circumstances meant that I would always be struggling to develop the rides much beyond the existing ‘customer base’. So I am always happy to advertise the efforts of those who introduce cycling events in the Wolds. A number are listed below and, I hope, will be added to as time goes on…

Heart of the Wolds Sportive

This was my first sportive. I rode the 100km version in its inaugural year of 2013 and thoroughly enjoyed it. Since then the event has developed successfully so that no fewer than four distances are on offer. A cheeky half of beer, a goodie bag and T-shirt for finishers. Based in Driffield the Heart of the Wolds Sportive takes place in April.

I’ve never ridden this event, but I’m happy to see a national player introducing cyclists to the Yorkshire Wolds. The Wiggle Vale Velo Sportive has three distances and sets off from York in April.

This ride exists in part to support the Yorkshire Air Ambulance. It is run by the local Rotary Club, amongst others, and being dependent on a range of sources of support does not take place every year. It is unique amongst sportives in the area by going up Nunburnholme Hill right at the beginning of the event. Worth checking out and takes place in May.

A charity ride that takes place in June each year setting off from Wetherby on the way to Filey on the North Sea coast. Some entrants choose to stay overnight whilst the more ambitious ride home on the same day. The route coincides with the Yorkshire Wolds Cycle Route at a number of points, most notably on the ascent of Settrington Bank just outside Malton/Norton.

I entered this event in its second year, only to be too ill to attempt it. I did ride a shorter version of this 123km route and found parts of it – especially the drag west out of Malton – to be harder than I had imagined. Unlike the Heart of the Wolds and Pock Pedal there is no chip timing for this event. Food part way round the route is provided by an on trend street food Citroen van that has great reviews and the start/finish is the impressive KP Centre at Kilnwick Percy where goodie bags and a range of refreshments are made available. Accommodation is also available at the KP, so this is an attractive weekend for those new to the area. The Wolds 123 – now with a range of distance options – runs early in July. [NB there doesn't seem to have been any updates to the web site since 2018, but the routes are still available to download.]

This two day event has grown in popularity with each successive year. The start point is Malton/Norton with an overnight campsite and barbecue at Hutton Cranswick. The ride follows the Yorkshire Wolds Cycle Route and is ridden in alternate directions (even years are clockwise; odd years anti-clockwise). Mechanical and other support is offered and the event sells out every year, taking place over a weekend in July.

A sportive with a difference. No chip timing and an afternoon start after coffee and biscuits. Overnight on-site camping available at the start/finish of Wold Top Brewery near Hunmanby. Runs during July or August – sounds interesting.

New for 2019 this August sportive has three distances and sets off from Bishop Burton College.

More Yorkshire Wolds cycle events will be added as and when I hear about them.