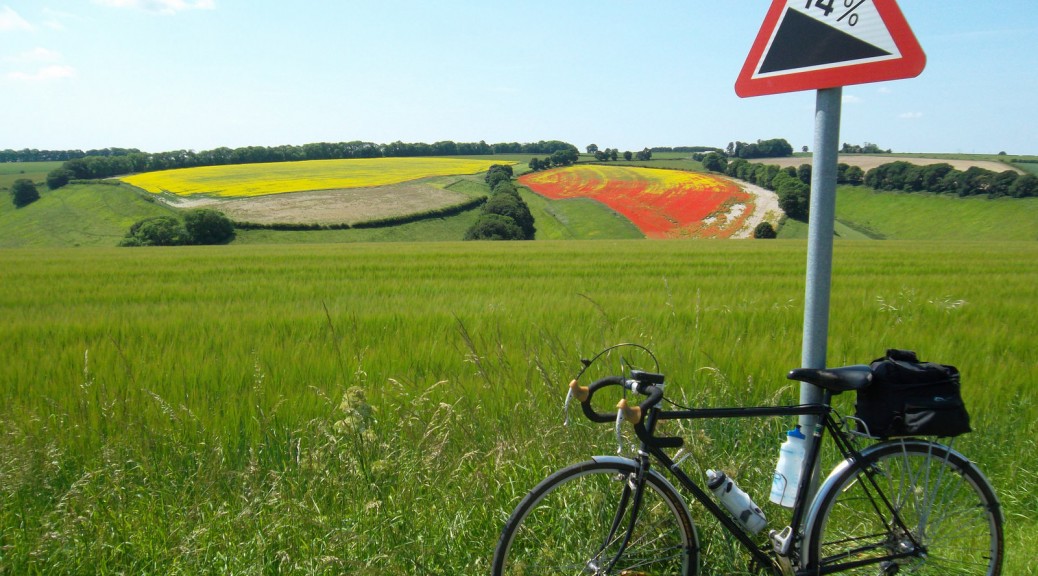 Although this web site came about as a direct result of my riding the proposed Yorkshire Wolds Cycle Route back in 2011, it covers other aspects that characterise this crescent of rolling chalk hills that stretch from Hessle on the banks of the Humber Estuary and up to Filey on the North Sea coast. So there’s the first outing for your Yorkshire Wolds cliché bingo dabber. “Rolling hills”, “hidden gems”, “bustling market towns”, “Hockney Country” – although that one seems to have fallen out of favour just lately – are terms frequently used to describe the area. But like all clichés there’s an element of truth to be found. Similarly, there is a tendency to compare the Wolds with the Dales and the Moors. So let’s do that, too.

I love cycling in the Yorkshire Dales. And my favourite stretch of road in all of Yorkshire – so in the world, really – is between Hawnby and Osmotherley on the Yorkshire Moors. Or Osmotherley and Hawnby. It’s just superb in either direction. Although both the Moors and Dales are wonderful, and can still be surprisingly quiet at times, the Yorkshire Wolds have a number of advantages for a range of cyclists. Yes, the hills aren’t so daunting, and the scenery isn’t so obviously dramatic, but there is a special feel to the Wolds that is difficult to capture for that calendar shot or box of fudge or something. David Hockney famously interpreted the ‘Big Skies’ around Thixendale and Warter. If you haven’t got £8million and change for the likes of ‘Woldgate Woods’ near Bridlington you can still experience the real thing for the price of a lemon drizzle cake and pot of tea instead in one – or more – of the many cyclist-friendly cafés in the area.

Characteristics shared by the Dales and Moors are the relative lack of roads in those areas. Yorkshire Wolds ‘B’ roads designated as a ‘Scenic Drive’ can easily by avoided by the many lanes that criss-cross the area (how’s your bingo card looking?). This means it is very likely that cyclists will report seeing more cyclists than motor vehicles as they pass through the Yorkshire Wolds. That’s not always the case in the Dales and Moors.

As part of the coverage of its launch in 2011 Dixe Wills rode the Yorkshire Wolds Cycle Route and wrote an excellent ride report of his experience. What I found particularly interesting, however, was the closing paragraph from an article about another long-distance cycle ride he had made. Dixe Wills’ earlier write-up for the Way of the Roses was topped and tailed by picture and words showcasing the Yorkshire Wolds (and remember this is after passing through the Forest of Bowland, Yorkshire Dales and Nidderdale)…

And furthermore, I was ready for the question every cyclist gets asked about a long-distance ride: What’s your favourite bit? My answer? The four miles on the way to the village of Tibthorpe, about 20 miles from the east coast: huge skies, an empty road beneath my wheels and the sylvan countryside below melting away in the summer haze. I’m ashamed to say I threw my arms out wide and, coming over all Leonardo DiCaprio, shouted out, “I’m the king of the wold”. Which just goes to show that country air may not be so good for you after all.

For about ten minutes I held the 2015 Strava KoM, making use of a howling tailwind, for the (downhill!) stretch Dixe Wills refers to. That day I was more concerned about not ending up in a field on one of the early bends after Huggate, but on other rides in the area there is usually more time to lift your eyes off the road and spot the birds of prey that seem to have had a resurgence in recent years. Aside from the more common sightings of kestrel and barn owl a real thrill is to see red kite that have had a flourished since 1999. Sometimes two or three at a time can be seen circling in the skies above the Wolds two decades after the successful introduction of breeding pairs. Over to the coast at Flamborough and Bempton there are nationally important sites of gannet, guillemot, razorbill and puffin. Be aware that the RSPB now charges for entry to the visitor centre – and access to the cliffs – rather than for car parking as used to be the case. (On my last – free – visit to the cliffs at Bempton I used a handy bench to park my bike against, only to discover the flat surface I had found was the freshly poured concrete base for a cycle shelter. I confessed, and the chap in the shop tamped it down again with a big stick.) Pheasant spotters will want to move inland to the hills around Warter where vast numbers congregate and Roe deer are an increasingly common sight.

For fans of historic buildings there is, of course, Beverley Minster and stately homes at Sewerby, Burton Agnes, Burton Constable, Burnby Hall and Sledmere House. Also worth a visit is the Buddhist Retreat at Kilnwick Percy and – a little way off the Wolds near Malton – Castle Howard. There are so many charming churches, including one at Fordon – claimed to be the smallest church in Yorkshire – just a few yards from the course of the Yorkshire Wolds Cycle Route. There are 47 villages over the 146 miles of the YWCR including some such as North Newbald that support more than one pub.

According to Wikipedia the Yorkshire Wolds “have a temperate maritime climate which is dominated by the passage of mid latitude depressions” which I take to mean it’s fairly warm and doesn’t rain much because the “warming influence of the Gulf Stream makes the region mild for its latitude“. As I understand it the clouds blowing over from the Atlantic tend to empty out over the Pennines and quite often the dire weather warnings we receive turn out to be false alarms.