The Yorkshire Wolds Cycle Route was devised by local and national bodies to promote cycle tourism in the East Riding of Yorkshire and the Ryedale area of North Yorkshire. It was launched in 2011 and passes through 47 towns and villages. The scenic loop can be started from any point on its 146-mile length, but for convenience this web site assumes a start from Beverley.

The route is signed in both directions, with slight deviations in places such as Beverley and Bridlington, for example to allow for one-way systems, but this web site takes its references from the clockwise version, which is the recommended direction. There is an off-road section just after North Newbald that some riders – particularly those with skinny-tyred road bikes – choose to by-pass (see also the Hints & Wrinkles page for more on this section).

Beverley is actually on the Holderness Plain, but as the route goes west it soon enters the Yorkshire Wolds and its southern, gentle slopes and on to quiet lanes including the beautiful dry valleys of Millington Dale in the East Riding of Yorkshire and North Yorkshire’s Thixendale. The route reaches its furthest point in the west in the Howardian Hills Area of Outstanding Natural Beauty at the ruins of Kirkham Priory. Malton, which styles itself as the food capital of North Yorkshire, is passed by on the outskirts – but well worth a diversion – and then the route turns east for a testing climb out of Settrington before dropping again to Sledmere House in East Yorkshire.

From here mostly quiet roads take us towards the North Sea at Hunmanby Gap and the northernmost point of the route. The route heads inland before visiting the coast again at Bempton – nationally important for its thriving seabird colonies – and Bridlington. With more than a hundred miles ridden there are thirty seven miles ahead on the way back to Beverley, starting with Woldgate – made famous as part of David Hockney’s ‘Big Skies’ series.

The twenty-five mile stretch of the route from Bridlington to just beyond Hutton Cranswick is shared with the Way of the Roses long distance coast to coast ride. At the point the two routes diverge the clockwise version of the route heads south to Bracken and through the villages of South Dalton, Etton, Cherry Burton and Molescroft before returning to the magnificent Beverley Minster.

This entirely unofficial web site celebrates the route and cycling in the Yorkshire Wolds more generally. Use the navigation bar to read about places to eat and drink as well as where to find cyclist-friendly accommodation. There is also a category for shorter loops – such as the Big Skies Bike Rides – including a number that feature the hill climbs of the Yorkshire Wolds. There is more on the motivation behind this web site on the About page.

At the time of writing there are some web sites with interactive maps displaying the Yorkshire Wolds Cycle Route that are incorrect (eg Cycle England and Komoot, so I won’t link to them) and that still show the proposed version. The easiest way to tell whether a map you are looking at is right or wrong is to check the northernmost point of the map. If the route does not reach Hunmanby Gap you are looking at the outdated version. The Yorkshire Wolds Cycle Route has passed through Hunmanby since its inception in 2011. 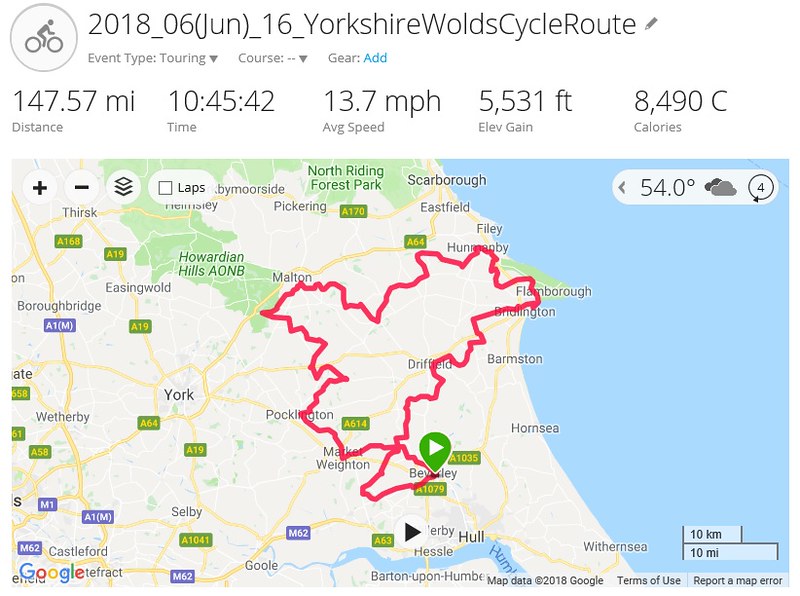