In 2010 a series of eight Big Skies Bike Rides was launched that were designed to encourage cyclists to discover the varied and interesting terrain of the Yorkshire Wolds. ‘Sledmere Country from Sledmere’ on the High Wolds is a ride that starts in East Yorkshire and passes over the border in to North Yorkshire. If you’re not already cycling through the village you can pull up in the car park near the memorials, grab your bike and set off down the hill. This is my favourite way out of Sledmere (at the Triton Inn turn left at the sign marked “Luttons Weaverthorpe”) and enjoy the rolling road towards the junction at a dip in the road between West Lutton and Cowlam.

Straight over the crossroads on towards Helperthorpe. This is a stretch of the Yorkshire Wolds Cycle Route, but once in Helperthorpe you’ll be looking out for a left turn signposted “E Heslerton Wold” – there’s also a brown Byways sign on the post – that will take you off the long distance route and on to a road with a heavily shrouded tree-lined summit. It’s almost a relief that you’re not on this road for long – the way ahead at first appears ominously steep – before turning left and passing Haverdale House along a very broken road surface that makes for a quiet route – unless you’re on bike that rattles. This road will find any lurking noise. The road out of Helperthorpe. If you have time there is a longer ride straight ahead, but on the Sledmere Big Skies Bike Ride it’s a left turn at the bottom of this hill

Along with the ride from Pocklington this a short loop that I first enjoyed when I had lost my cycling mojo somewhat and needed a sort of cycling pick-me-up. (There was a lovely serving of tea and scones back then, which always lifts the mood.)

Although this route is well worth the effort of seeking out in its own right it offers a glimpse of Snainton and Settrington routes which also have much to commend them. On the way back from Haverdale there is a drop in to West Lutton before taking the main road out west through the village and – on a rising bend – taking the right turn signposted ‘High Mowthorpe, Settrington’. Don’t miss it. This is a generally quiet road, but it does seem to have a fair bit of agricultural vehicles with those trailers pulled behind them. On another day you might wish to take in the descent in to Settrington, but a left turn, where the Yorkshire Wolds Cycle Route is picked up once more for the remainder of the ride – followed by even quieter roads takes you through Duggleby. I should find out more about Duggleby Howe and its nationally important round barrows – the largest in Britain.

There is less than a mile of mostly downhill road to Kirby Grindalythe and its Norman church. Before the long descent in to Sledmere there is the not inconsiderable bump in the road as the route passes over the OS map’s single chevron pointing towards the possibly wearying cyclist. On this and longer rides there is always the temptation of refreshments in Sledmere, and the good news is that the Coach House Café in the grounds of Sledmere House (this side of the turnstiles) has been newly renovated and looks to be rather well done.

I like this ride for the varying scenery and largely quiet, undulating roads. If the stats on Strava are anything to go by it’s not a route that has been ridden a great deal in comparison to some of the other Big Skies Bike Rides. Why not give it a try? 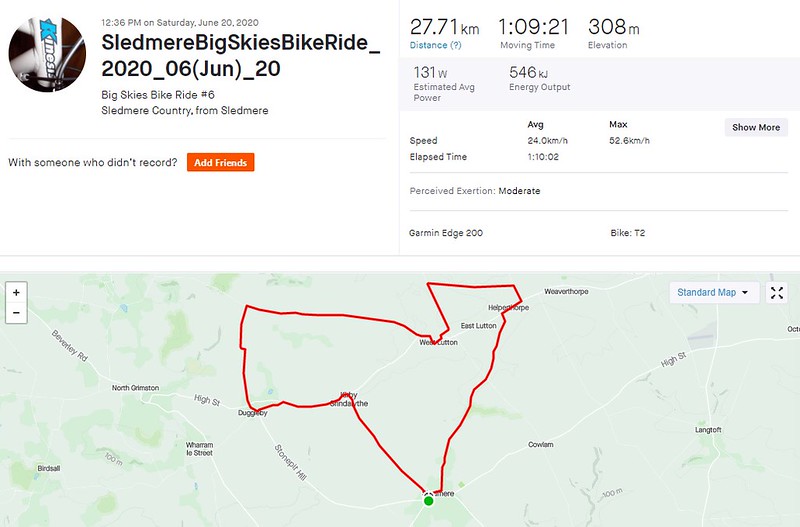 View this ride as a Garmin Connect activity or a Strava segment.

Download the PDF map for Sledmere Country from Sledmere