I was a member of the Young Ornithologists’ Club before I joined the Cyclists’ Touring Club as a schoolboy and for me the experience of appreciating Yorkshire Wolds wildlife has been a vital part of cycling in and around the area. Back then I collected the full Orbis publication ‘The Encyclopedia Of Birds’. Week by week the collection would build up in to a pile of magazines that went in a cardboard box to be stored in the loft for the next three decades. Yes, you can find all the up-to-date information you need – and more – on the Internet these days, but when I wanted to carry out some research about the UK distribution of Red Kite I was interested to read a contemporary account from the time when I was a child. A map confirmed that areas where Red Kite could be found all year round were limited to Wales. 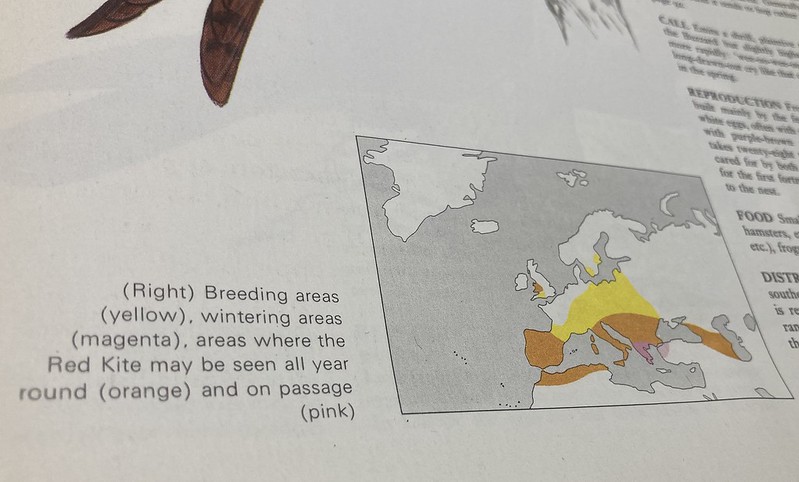 Compare that to the map on the Yorkshire Red Kites web site that also details the reintroduction programme of 1999 at Harewood Estate in West Yorkshire.

Over the past few years I have noticed these magnificent birds more frequently whilst cycling around particular parts of the Yorkshire Wolds. So I thought I’d put together a ride that takes in most of the places where I’ve spotted Red Kite. The route is a little under forty miles long.

From Etton the route goes gently upwards before dropping in to the shallow Kiplingcotes valley, over the crossroads and up again, passing the start point of the Kiplingcotes Derby. That route is followed over the next crossroads before ramping up for another at Money Hill. The ‘Kiplingcotes’ sign that once pointed further north has been missing for a while now, but we’re turning left on to a lumpy road and heading for Goodmanham. Here I saw the unmistakable markings of a solitary Red Kite over Goodmanmham Wold some way in the distance to the north.

Flooding around Goodmanham meant I had to divert through Market Weighton before picking up the route towards Londesborough then Burnby and Nunburnholme. I also had to switch off the auto-pilot that would have steered me towards Kilnwick Percy or Pocklington, but it was less of a wrench to take the back road to Warter at the foot of Totterdown (Nunburnholme) Hill – that climb is one I no longer care for. The skies above the woods on the approach to Warter – take care on the undulating road with its rough surface in parts – are usually a safe bet for spotting birds of prey, but I saw none here this day. After the village sign on the outskirts of Warter I prefer to bear left (signposted Pocklington) rather than pass by the distinctive cottages opposite the war memorial. A right turn on the B1246 is quickly followed a hundred yards or so later with a left turn and the start of a long, gradual climb from Warter to Cold Wold on the way to Huggate. (The route could be shortened by cutting out Huggate, instead going past the war memorial, travelling east for a minute or so then carefully taking the right turn whilst still in Warter opposite the pond.) 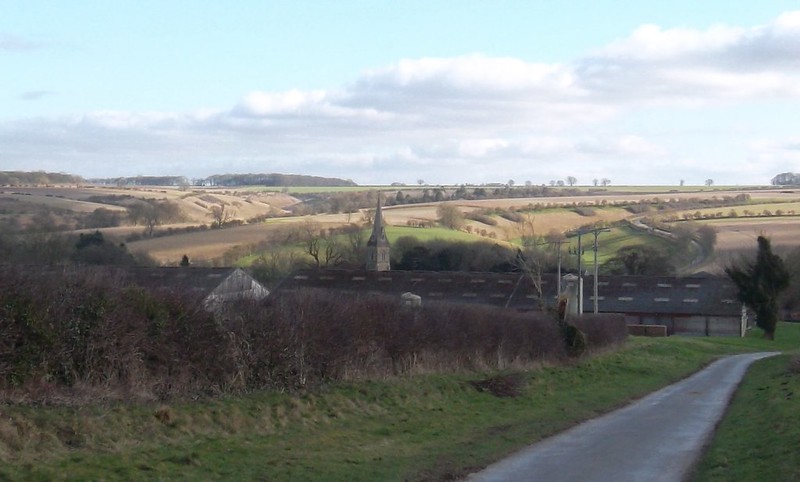 Looking back on the first hill out of Warter with Bailey Dale beyond. Bailey Lane is also the way out of Warter after the detour via Huggate.

In Huggate a right turn before the Wolds Inn leads back to Warter over Warter Wold. Again at the B1246 in the village a right turn is followed quickly by a left turn, opposite the pond, and the start of an always enjoyable climb along Bailey Lane. As an aside I find this a far more rewarding climb than Nunburnholme Hill – another road that leads to the same ridge. For me there is a greater sense of openness, the road wider and the views – especially over and down to the left – are much more pleasant. Oh, and it’s not as steep.

The road out of Warter also gave me my second and final Red Kite sighting of the day. The bird appeared overhead to my right and glided over the road without a single wing beat. I watched it for as long as I could crane my neck to see the kite whilst still riding safely on towards the T junction at the top of the now easing climb.

Either direction from the junction ultimately leads to a thrilling, long descent, but here I turn left and follow the signs towards Middleton-on-the-Wolds. Making three right turns in Middleton-on-the-Wolds sends us west along the A614 that passes through the village, but only for a couple of hundred yards before taking the left turn on to Holme on the Wolds. (On the ride before this one I saw for the first time Red Kite over Lund Wold which this ride passes by here.) From Holme on the Wolds it’s on through South Dalton and the Yorkshire Wolds Cycle Route signs directing riders along Warter Road, effectively Etton’s back road, so that you enter the village via the tradesman’s entrance rather than along its main street. (The provisional Yorkshire Wolds Cycle Route originally passed through Etton before being amended, and that’s the way I went this day on the beginning of the ‘Red Kite Bike Ride’; it’s my recommendation if you haven’t seen the landmark St Mary’s spire gradually revealed as you pop up over the little ramp between Etton and South Dalton, just like in that video made to promote the Tour de Yorkshire.)

Perhaps I could have timed my midday ride better – apparently, it’s more likely that you will see Red Kite late in the afternoon – but Yorkshire Wolds cyclists are blessed with varied and interesting scenery, mostly quiet roads and occasionally testing climbs that makes a ride such as this one more than worthwhile in its own right. I’ll be back to try it again soon… 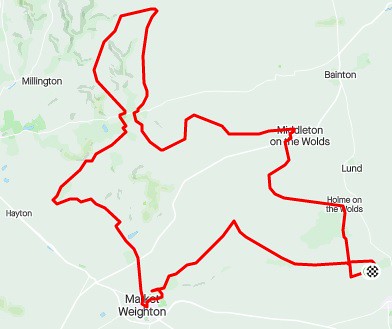 Ideally, I would have been able to create some clever Strava Art in the shape of a fork-tailed bird of prey, instead of a care-worn bat or some sort of flying squirrel. Whatever. At any rate I created a course in Garmin Connect which I didn’t follow on the day because of flooding at Goodmanham (edit: link to Strava activity updated July 2021)

… even more out of focus, but this angle shows a clearer outline of the characteristic forked tail that distinguishes the Red Kite from the Common Buzzard with its more rounded fan-shaped tail ???? pic.twitter.com/ODlKpZb0La 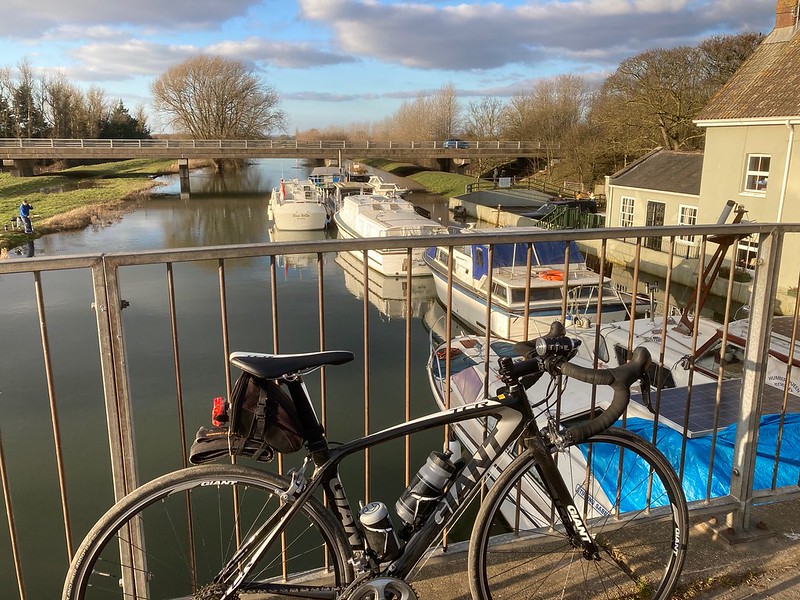 On the day I did this ride I travelled along the Leven to Molescroft cycle path via the pedestrian and cycle bridge at Tickton, starting to record the ride on my Garmin from Etton. (I later retraced the route because my preferred way home through Beverley’s Long Lane had been particularly busy with groups of walkers the previous week.) Alternative start points are anywhere along the route assuming that you can satisfy yourself that you are following the current COVID-19 requirement that you use your “common sense” when going out on your bike for exercise.

Stops along the route

Like many of the cycle rides to be enjoyed on the Yorkshire Wolds this ‘Yorkshire Wolds Red Kite Bike Ride’ has no railway crossings or traffic lights, and only one roundabout along the route (unless, like me when I did this ride, you find yourself passing through Market Weighton on your journey), so you can expect to tap along with minimal stops if you wanted to use this ride just for fitness; there are a couple of moderate hills to test your climbing legs. But you would be potentially missing out on lovely views – Red Kite sightings and more – if you focused your attention purely on thrashing around or watching the numbers on your GPS device. Similarly, when permitted, there are a number of tempting places to take refreshments depending on where you start your ride, including the Michelin-starred Pipe & Glass in South Dalton; the Fiddle Drill in Goodmanham, and Rose’s Walnut Cottage Tea Room, and the Wolds Inn, which are both in Huggate. More details on these and other cyclist-friendly places can be found on the Eat & Drink page of this web site.