A recurring theme in reviews for the original 100 Greatest Cycling Climbs went something like “Why wasn’t such-and-such hill included?” Fans of Scottish hill climbs in particular took offence at the ratio of their favourites to those in Wales (7:14) – and the inclusion of some lesser climbs in the South East especially. Back in 2010 my two penneth worth was about the road between Grinton and Askrigg… 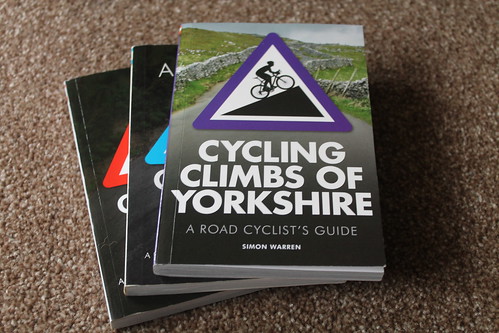 Simon Warren describes a ride towards Askrigg (# 46 Oxnop Scar) that I haven’t done, but would like to. According to Warren this climb has a height gain of 243 metres. The Harkerside road from Grinton goes from about 186 metres to 541 at its peak. Even if you start counting at Low Witta (about 220 metres) the climb to the top, and the cattle grid shown below, is well over 300 metres of height gained, with more false summits than I can remember, and no fewer than seven Ordnance Survey chevrons pointing at the wearying cyclist. The chap in the B&B in Askrigg told me that drivers’ Sat Nav systems sometimes send them along this narrow road. I wouldn’t fancy driving it, but how long will we have to wait before 100 More Greatest Cycling Climbs I wonder…?

Well I got the follow-up title wrong (the sequel was to be ‘Another 100 Greatest Cycling Climbs‘) and the climb didn’t make the cut, but that oversight is remedied in ‘Cycling Climbs of Yorkshire: A Road Cyclist’s Guide‘, the latest publication in this popular series.

(By the way, if you get the chance, do take the road between Grinton and Askrigg – it’s called Fleak Moss – as part of a loop from Askrigg or somewhere in Wensleydale; you can hardly go wrong in this my favourite part of Yorkshire for cycling, walking or maybe just sitting in front of that open fire with a cheeky pint.)

But perhaps – for this East Riding cyclist anyway – the greatest oversight in the first two volumes of the original books is the poor showing of the Yorkshire Wolds; only one climb (4/10) gets a mention as that area’s sole representation in the second volume. Hanging Grimston, despite being categorised as being in the ‘East Riding’, is actually over the border – the physical separation that is Salamanca Beck – in North Yorkshire, so is not even an ascent those of us in East Yorkshire can claim as our own. More on East and North Yorkshire later…

However, despite not one hill scoring more than 5/10 no fewer than seven out of the 75 climbs in this second regional guide (the first was ‘Cycling Climbs of South-East England‘) are within the Yorkshire Wolds. Anyone who as ever ridden an established sportive in East Yorkshire will most likely have gone up Nunburnholme Hill. Each year on event photographers’ web sites there will be some poor soul captured – mercifully in the distance and therefore fuzzily out of focus – wheeling their bike up beyond the final push. Let’s hope they don’t have the energy to read through the pages of ‘Cycling Climbs of Yorkshire‘ as this nemesis of over-geared and out-of-condition road cyclists in East Yorkshire scores a modest 2/10 according to Simon Warren.

But the lowest rating of 1/10 is reserved for Brantingham Dale. On a good day I get up on a 39T chain ring (that’s the middle one of my triple – the inner one on my road bike is a reassuringly forgiving 34T) but I have suffered the ignominy of being overtaken by a young bloke going up on the big ring. So perhaps I shouldn’t grumble about that apparent low-scoring slight.

Apologies for dwelling so much on the Yorkshire Wolds. And the Dales and Moors. It’s just that I can’t comment specifically on the hills of South and West Yorkshire. For me there is a world of difference between taking in the vistas of the Dales, Moors & Wolds and humping your bike past somebody’s kitchen window in Huddersfield or Sheffield or somewhere like that. Nevertheless, there is clearly a demand for this kind of stuff among list ticking roadies out there and not just those trying to “Ride Them All“. 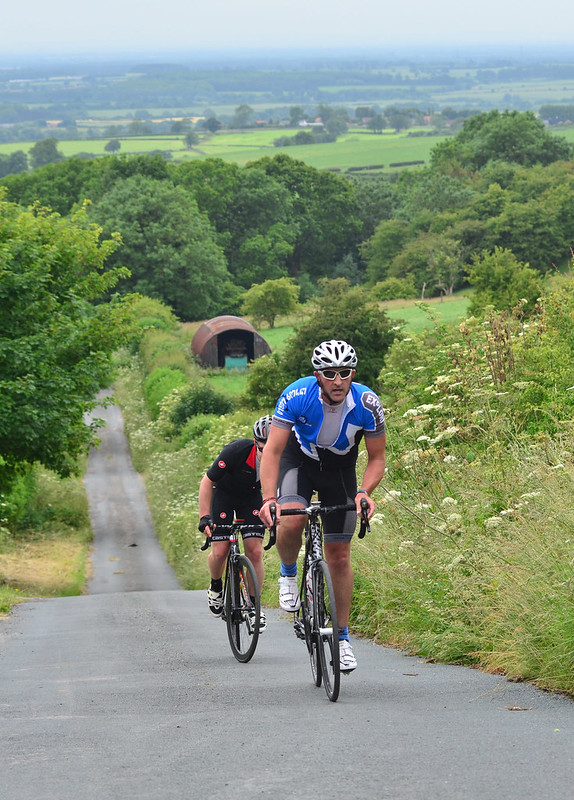 However, if you had to be scrupulously impartial and include these Yorkshire cycling climbs based on some sort of inflexible measure it’s likely the Yorkshire Wolds would struggle to make the grade. For instance, some of the climbs out of Grosmont and Egton Bridge are stiffer and longer than almost anything the Wolds has to offer. 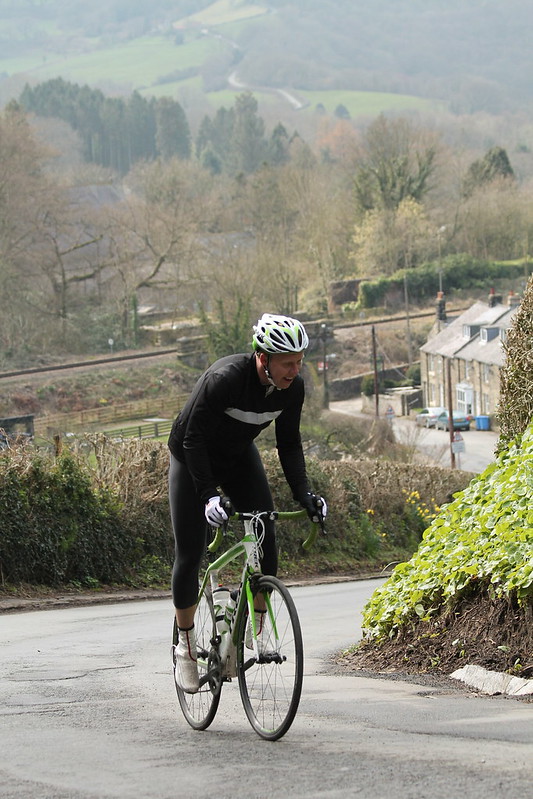 The climb out of Egton Bridge towards Egton, with one of the roads in to the village visible in the background. Neither features in Cycling Climbs of Yorkshire

The book follows the now familiar formula of a double page spread for each climb – used in earlier volumes for perhaps a third of the climbs – with one page bearing a photograph and the climb’s rating, and the other page containing a brief overview and including an even briefer fact file along with a map, grid reference, length, height gain and approx. climb time. All the entries carry a graphic of the climb’s profile detailing particular points of interest – such as cattle grids, cobbles, hairpin bends etc. – that were presumably excluded for some climbs in previous books for reasons of space. There is also the tick list at the back, but it does not provide a page reference or other system to avoid flicking through the book to find the entry you want. 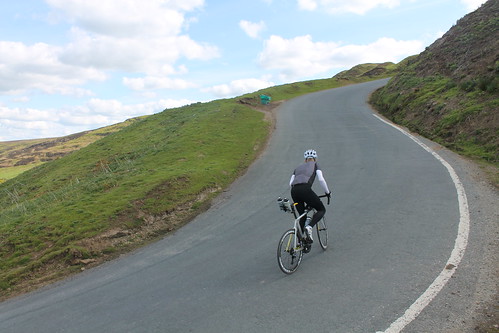 Safely round the hairpin on Rosedale Chimney. In ‘East Yorkshire’

It’s interesting to compare this book with James Allen’s ‘50 Classic Cycle Climbs: Yorkshire & Peak District‘. Although that book takes a different approach both authors conclude that Trooper Lane in Halifax is worthy of the grading 10/10. What’s notable is that it doesn’t feature in Simon Warren’s work until this third opportunity. That’s the difference of local knowledge, I suppose. They also agree on the maximum score for Caper Hill/Glaisdale Head, but James Allen gives the infamous Rosedale Chimney ‘only’ 9.5/10 compared to Simon Warren’s 10/10. It’s also a relief that since ‘100 Greatest Cycling Climbs‘ was released this latest publication upgrades Boltby Bank/Sneck Yate Bank from 7/10 to 8/10. That’s still short of the grade given in ‘50 Classic Climbs‘; James Allen gives it 10/10. (For what it’s worth – and in my humble opinion – I found Boltby Bank harder going than Rosedale Chimney.) 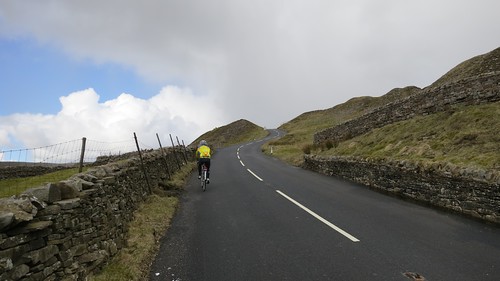 A hapless East Yorkshire cyclist grinds up Buttertubs Pass on a cold day one April. Despite the ‘iconic’ images during stage one of the Tour de France 2014, the southern ascent doesn’t get a separate listing in any of Simon Warren’s Cycling Climbs books. Image courtesy of Dave Barter

So, if you’re a cyclist in Yorkshire and like climbing hills you will be needing a copy of this book. Further summary points:

A version of this review first appeared on the web site CycleSeven.org, which is no longer online.