Cottingham in East Yorkshire is the meeting point for a number of road cycling groups. My former club meets in the bus shelter on the ‘green’, but further along the road a more sports-orientated group has its start point. One Sunday morning three riders turned up on lightweight road bikes and came over to the shelter. My old ride buddy, Jeffery, tried to shoo them away in the direction of the racier set. No, they definitely were there to come out with us. Still unconvinced, Jeffery set of with the trio for a jaunt around the southern Yorkshire Wolds.

I wasn’t there later on, but towards the end of the ride – along the twisting, tree-lined ascent of Brantingham Dale – it turned out no-one was responding to Jeffery’s chit-chat as he tapped away along Dale Road. He looked around. Jeffery was genuinely surprised that his new-found companions were nowhere to be seen. I do hope those cyclists weren’t disheartened, but Jeffery had overlooked just how fit the grizzled cycle tourist can be compared to the beginner cyclist. Although it is no alpine climb Brantingham Dale can be a bit of a shock for the unprepared cyclist.

I was delighted to see Brantingham Dale included in Simon Warren’s ‘Cycling Climbs of Yorkshire: A Road Cyclist’s Guide’. It just sneaks in with a score of 1/10. There are countless hills in Yorkshire that could lay claim to a place in this excellent little book ahead of Brantingham but Warren, who went to art school in nearby Hull, recognised the worth of this genuine tester. I’ve had ride buddies grind to a halt after being over-confident on the earlier, gentle incline only to blow up on one of the later ramps. I’ve also had a young fellow wordlessly pass me by on the big ring as I grunted my way up. When Warren’s regional guide to Yorkshire climbs was released one online reviewer dismissed Brantingham Dale and other minor climbs in ‘Humberside’ as “obscure”. (The same reviewer – wrongly – proclaimed that the publication outlined the Buttertubs Pass climb taken in by the 2014 Tour de France Grand Depart. He was confusing north with south, so what does he know, eh?)

Certainly the early gradient of Brantingham Dale is not so testing, but – almost imperceptibly – the road gradually steepens and before long I find myself searching for a lower gear – and another – as I round a bend and find there is still another ramp and bend to tackle. The heavily leafed trees in summertime – and my slackening pace towards the summit – mean my Garmin device occasionally auto-pauses as I grind my way up this otherwise satisfying Yorkshire Wolds climb.

Somehow I find myself in the top quarter of the Strava leaderboard for the ‘Brantingham Full’ segment – I think I had a tailwind on that occasion – with my only sub-ten minute ascent to date. Simon Warren reckons that eight minutes is the time we should be aiming for. It’s a good job the views are a welcome distraction for those of us who routinely take a while longer. 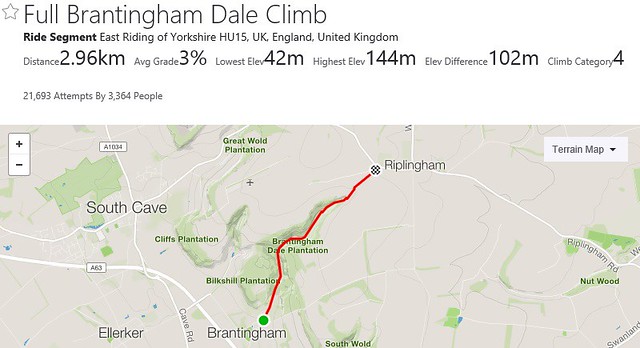 A 25-mile lumpy loop that takes in Brantingham Dale (and Trundlegate) from Welton: 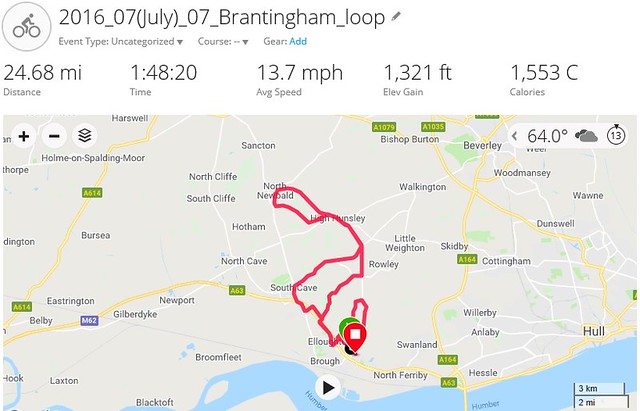